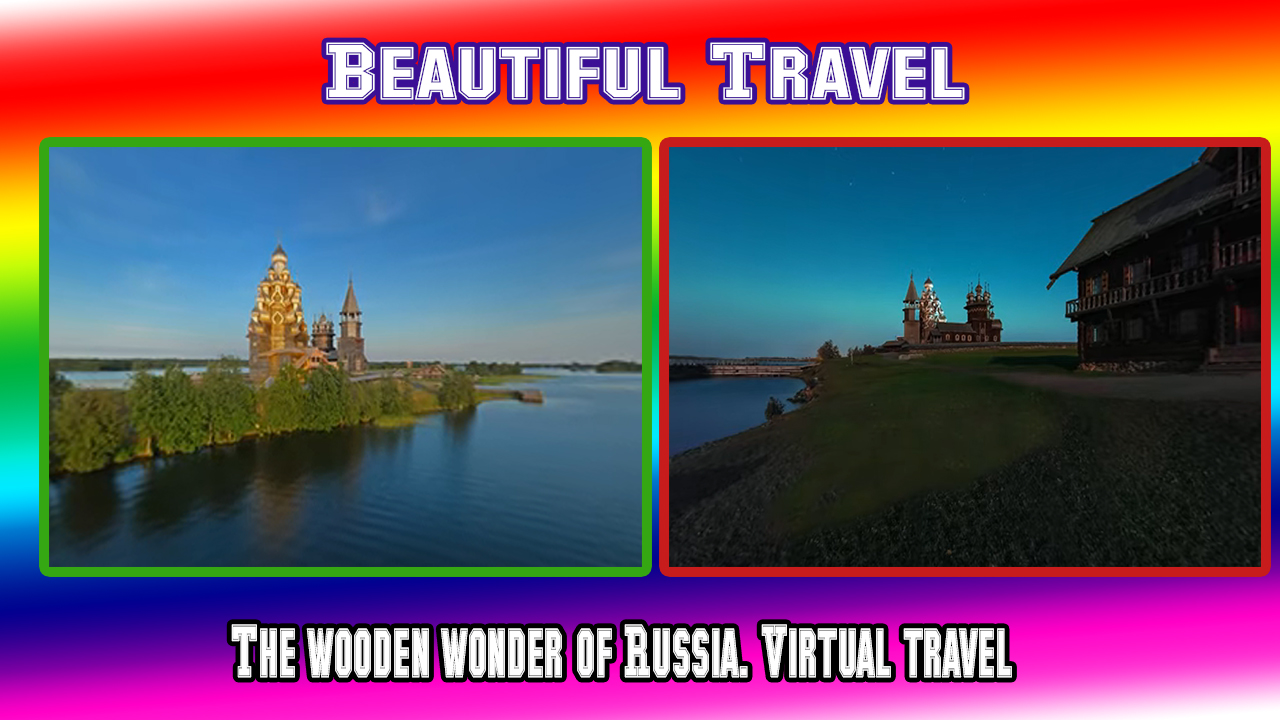 The wooden wonder of Russia In the northwest of Russia, there is the Republic of Karelia, an ancient land steeped in history. Over three hundred years ago, the 22-dome Transfiguration Church was built on Kizhi Island.

It is one of the largest and most complicated traditional wooden constructions in the world. In the middle of the 20th century, ancient houses, windmills, temples, and many other historical constructions were brought here from all over Karelia.

That’s how this museum-reserve appeared — the place that preserves not only material evidence of the past but also ancient lores, arts and crafts.

The island’s most beautiful monument is the architectural ensemble of the Kizhi Pogost that became one of the first three UNESCO World Heritage Sites designated in Russia in 1990. Each season requires its own chores.

In the post-harvest autumn, there comes a time for some domestic work, handicraft and repairs, music, and stories. A song defines the rhythm for work and keeps from feeling bored! Wooden churches appeared in ancient Russia at the same time as Orthodoxy did.

Wood is a unique material. Wooden constructions require as if being alive, very special care. They need to be protected, renovated, and sometimes even risen from the ashes.

Having finished his work, he hurled his ax far into Lake Onega, saying: “There has never been and never will be a church like this.” The Church of the Transfiguration served only in summer. Close to it, we can see the 10-dome “winter” Church of the Intercession and a bell tower.

Together with a fence, they form the famous Pogost of Kizhi. In 1988, the “voice” of Kizhi was brought back to this place. After decades of silence, the bells were installed in belfries of churches and chapels in the Kizhi area.

The Kizhi Museum includes not only house-monuments. Thanks to the staff of the museum, the historical settlements continue to live the way they did 150 years ago. In ancient Russia, a samovar was at the head of the table.

In Zaonezhye, rosebay willowherb has been historically brewed as a tea. In the 18th century, it was even exported to England. To enhance flavor and value, people added lingonberry or blueberry leaves and thyme to this tea.

In front of us, we can see Yelizarov’s house that was brought from the village of Seredka. Many peasant houses were constructed in the same way: both living and utility premises were under the same roof so that people could go outside less frequently when it is freezing.

The length of Kizhi Island is five and a half kilometers. It is not so long, but each turn of the road reveals a new breathtaking landscape. The overall number of the architectural items of the museum is 68 monuments.

Look how harmoniously they enhance the landscape. And how beautiful these bright colors of the short northern autumn are! Straight roofs of the peasant houses were covered with a batten. But this material couldn’t be used for creating ornately-shaped cupolas and roofs of churches and belfries.

Eventually, a special roof covering appeared, wood shingles. Made with small aspen pieces, these shingles were carved in a particular form with a razor-sharp carpenter’s ax.

They were arranged in chess-board fashion and as a result, a beautiful and lasting roof of various complex shapes could be created. In fact, it took more than 30,000 wood shingles to create the roof of the Church of the Transfiguration!

That’s how it is done: you take an aspen log and split it apart into small plates. If it is free from knots, it comes easily. A few more minor adjustments and we can carve wood shingles. They are arranged as any other roofing, in rows from bottom to top.

The upper row covers two-thirds of the lower one in length and is shifted in half across its width to cover the crack between them. In this way, row by row, the solid roofing is made. Concurrently, a beautiful pattern appears.

This thickening works as a drip edge from which water goes down and does not get inside. Well, there are a lot of little details while we have just talked only about wood shingles.

All this has been worked out by many generations, every detail is not random at all: it works for reliability, durability, and beauty. Let’s continue our tour through this ancient village.

Traditional houses impress with their dimensions, each of them served for several generations of one family. And unlike the settlements of Central Russia, the houses are built here not along the street but along the shore of the lake, which was both a road, a well, and a breadwinner at the same time.

Kizhi is the place of the intersection between Russian and Finno-Ugric cultures. You can not only see but also hear them. Right in front of us, we see a kantele which was played by Finnish and Karelian people.

It may contain between 5 to 12 strings. Now it is a recognizable symbol of Karelian musical culture. And what you now see is a Yoshiko, a two- or three-stringed bowed lyre. Since 1989, a folk ensemble studying ancient melodies and old ceremonies has been functioning in the museum.

Karelian craftswomen knew a variety of different handicrafts. Different types of embroidery, including goldwork on velvet, several ways of weaving, and many others. Local know-how is the double-sided embroidery with no inner side.

Craft ladies could create highly sophisticated patterns with red threads and, in doing so, they calculated every stitch even before the start of the work. We can endlessly enjoy the view of the Kizhi architectural ensemble.

Now we face the Chapel of the Transfiguration of our Lord. It was built no later than the first half of the 19th century in the village of Kavgory situated on the Zaonezhye Peninsula in the northern part of Lake Onega. From another village of Zaonezhye, Vigovo, the Chapel in the name of the Not-Made-by-Hand Image was brought here.

It was built around 300 years ago. To the north of Yamka village, there is the “Pudozhsky” sector of the Kizhi Museum. Three giant houses stand on a high bank. Closer to the lake, one can notice barns.

Such constructions are common to the Pudozh coast of Lake Onega. Our journey is coming to an end. Let’s have a final look around this breathtaking scenery, created by both nature and the human! Guided excursions to this island – the world of living history – is taking place in winter and summer. Kizhi is harmony, peace, and beauty. It is a wonder worth seeing.